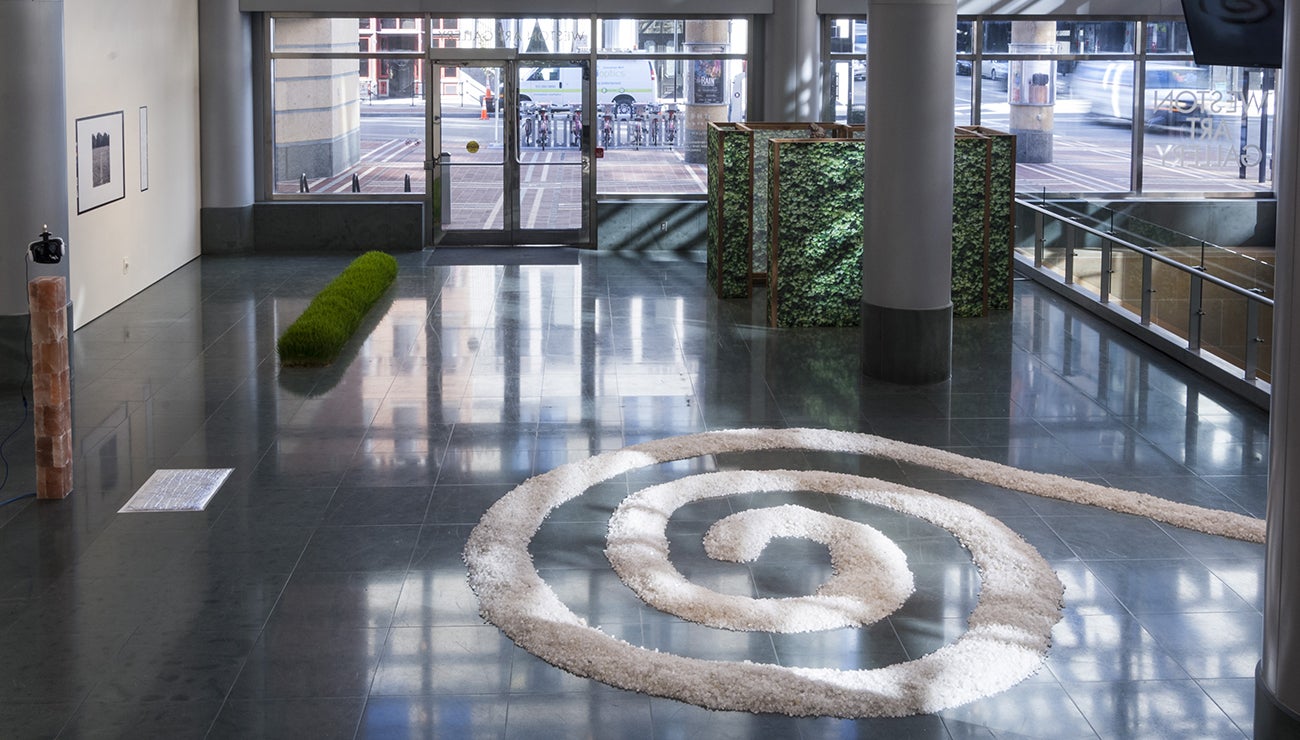 CINCINNATI, Ohio—On Friday, February 10, from 6 to 8 p.m., the Cincinnati Arts Association’s Alice F. and Harris K. Weston Art Gallery in the Aronoff Center for the Arts will open three new exhibitions: The Wired, a group exhibition of contemporary sculpture and installation works curated by newcomer C. M. Turner; The Thread in the River, a photographic journal by Jane Alden Stevens that documents her family’s evolutionary development; and Calling, an installation, new series of drawings, and animation by Kate Kern that examine the natural world through science and religious belief. (See separate press releases for the concurrent Jane Alden Stevens and Kate Kern exhibitions.)

Presented in the openness of the Weston Art Gallery’s street-level exhibition space, The Wired evokes a sort of contemporary art bio-dome. Here, the aesthetics of spacious skies, rocky outcroppings, and verdant gardens provide an earthy pulp to balance the digitally driven theoretical content in a merger of form and function that ultimately slips the boundary between the corporeal world and the world of computerized connection.

Caroline Turner and Ian Anderson’s virtual reality installation Always the Dream combines both physical and digital space to underscore the connectedness of these two realms.

In Façade, a sculptural installation by Future Retrieval and Jordan Tate, the artists state they, “. . . combine a high-low approach to a mixed-media European garden. The installation exposes the structures of artifice, like an exploded diagram highlighting not only the trompe l'oeil but the foundation that supports it.”

Future Retrieval (founded 2008) is the collaboration of Katie Parker (b.1980) and Guy Michael Davis (b.1978). Katie Parker was born in Jonesboro, AR, and Guy Michael Davis was born in Bartlesville, OK. They both live in Cincinnati, OH. Future Retrieval uses three-dimensional scanning and digital manufacturing of found forms that are molded and constructed in porcelain, mimicking the history of decorative arts and design. Their process addresses the conceptualization, discovery, and acquisition of form, to make content-loaded sculptures that reference design and are held together by craft.

Parker is an Associate Professor at the University of Cincinnati (U.C.) where she directs the ceramics department. Davis works for multiple designers across the country and is an annualized Assistant Professor at U.C. They received their masters of fine arts in ceramics from Ohio State University and bachelors of fine arts from Kansas City Art Institute, MO. Their work is held in numerous collections such as Arizona State University Ceramics Research Center (Tempe, AR); Cincinnati Art Museum (Cincinnati, OH); 21c Museum Hotel (Durham, NC); Society of Dresden Porcelain Art (Frietal, Germany); and The Pottery Workshop (Jingdezhen, China). They have exhibited both nationally and internationally with recent shows in New York City; Jingdezhen; Cardiff, Wales; Philadelphia, PA; Kansas City, MO; Ann Arbor, MI; and Minneapolis, MN. In 2014, they were artists in residence at the Bemis Center for Contemporary Art in Omaha, NE, and recently completed Smithsonian Artist Research Fellowships in Washington, DC, and New York City. This summer they will be resident artists at IASPIS in Stockholm, Sweden.

Jordan Tate (b. 1981) creates work representing a shift away from the understanding of photography as mechanical reproduction and toward an acknowledgement of the image-maker as the mediator of sight. His work is based in ongoing research/meta-photographic critique concerning the visual and conceptual processes of image comprehension. Tate is an Assistant Professor of Art at the University of Cincinnati. He has a bachelor of philosophy in interdisciplinary studies from Miami University and a master of fine arts in photography from Indiana University. He was a Fulbright Fellow in Berlin, Germany in 2008-09. Tate’s work is currently held in collections nationwide including Rhizome at the New Museum (NY, NY); the Museum of Contemporary Photography (Chicago, IL); The Fred and Laura Bidwell Collection (Cleveland, OH); the Cincinnati Art Museum (Cincinnati, OH); the Columbus Museum of Art (Columbus, OH); and the Museum of Fine Arts (Houston, TX).

Ian Anderson (b. 1991) currently lives and works in Cincinnati, OH. He received a bachelor of fine arts in interdisciplinary studies from the University of Cincinnati (2015). His work addresses the emerging role and efficacy of 3-D modeling in the contemporary art world, questioning and assessing its ability to simulate reality across multiple hardware and software platforms. In addition to his studio practice, Anderson collaborates with other artists on virtual reality and 3-D modeling commissions in a formal capacity at IRL Gallery, a non-commercial gallery he co-founded in 2016 in Cincinnati’s Over-the-Rhine neighborhood.

Caroline Turner (b. 1993) currently lives and works in Cincinnati, OH. She received a bachelor of fine arts in interdisciplinary studies and a certificate in critical visions from the University of Cincinnati (2015). Her work spans a wide variety of media, centering on the intersection of technology, culture, and the human condition. Turner highlights underlying information that problematizes or alters how we situate ourselves in reality. In addition to her studio practice, Turner co-founded IRL Gallery with Ian Anderson, an exhibition space that blurs the line between seeing art in real life and viewing documentation online.

Justin Hodges (b. 1985) is an interdisciplinary artist and educator originally from Southeast Georgia. He received a bachelor of fine arts in photography and a master of fine arts from the University of Cincinnati (2012 and 2015 respectively) focused on photography and installation. He currently teaches photography and digital media at Georgia Southwestern State University in Americus, GA. Hodges’s work addresses the proliferation of digital technologies and the ways in which these technologies shape perception and the natural world. His work has been exhibited nationally and internationally including the Kunsthalle Weißensee in Berlin, Germany; Lanzhou City University, Lanzhou, China; Inert Gallery, New York, NY; the University of Notre Dame’s Jajaja Space (South Bend, IN); Skylab Gallery in Columbus, OH; and the former Phyllis Weston Gallery, Cincinnati, OH. Hodges now serves on the board of the Americus and Sumter County Arts Council.

Casey James Wilson (b. 1986) is an artist and educator, currently living and working in Cincinnati, OH. Wilson has a bachelor of fine arts in photography from Texas State University in San Marcos, TX, and a master of fine arts in interdisciplinary studies from the University of Cincinnati (2016), Cincinnati, OH. Wilson’s work has been exhibited nationally and internationally including recent exhibitions at Blue Star Contemporary (San Antonio, TX); The Carnegie (Covington, KY); the Contemporary Arts Center (Cincinnati, OH); Gray Matters (Dallas, TX); Neon Heater (Findlay, OH); and Newspace Center for Photography (Portland, OR).

C. M. Turner (b. 1986) holds a bachelor of arts in studio art and exhibition from Goddard College in Plainfield, VT (2011). In 2013, Turner returned to his native Cincinnati after living and working in New England for seventeen years to earn a master of fine arts in interdisciplinary studies with a concentration in media arts from U.C.’s prestigious College of Design, Architecture, Art, and Planning (2015). Since then he has curated and exhibited his multimedia installations and art experiences throughout the city. From 2015-17, Turner served as an adjunct professor at Northern Kentucky University’s School of the Arts. He has spoken on panels for the 2014 Mid-America Print Council conference and the 2016 Mid-America College Art Association conference. He is the co-founder and curator of Restless Domestics, a semi-annual summer exhibition highlighting urban transience, quotidian practices, and the live/work space economy. 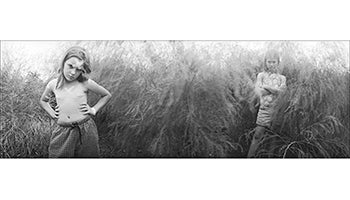 The Thread in the River: Photographs by Jane Alden Stevens 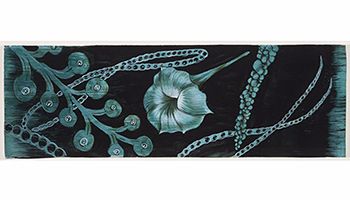