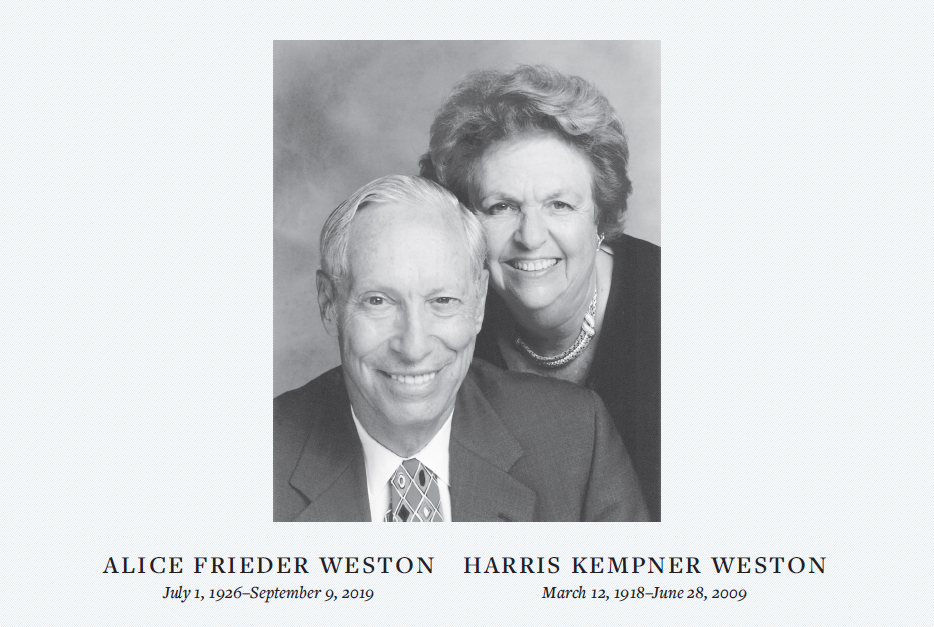 Along with Joyce and Roger Howe, Dr. George Rieveschl Jr., Elizabeth A. Stone, and Albert Vontz Jr., Alice and Harris Weston, were the founding patrons of the Weston Art Gallery and gave the most to sustain it on an annual basis. The Westons were the driving force for its inception in 1995 as both worked tirelessly to garner support and funding to carve out a premiere space downtown for local and regional artists.

During the development of the Aronoff Center for the Arts, they envisioned a multi-use center. An accomplished artist and Cincinnatian, Alice said, “We felt that, in order to have a real arts center, it should also include a visual arts component. We decided to encourage that vision, and upon suggesting the inclusion of an art gallery, it was agreed that the Aronoff Center would, indeed, become a true arts center.” She saw the future of the art gallery as “primarily an outlet for regional artists, which will also have access to artists of national scope.”

Alice made tremendous contributions to the Cincinnati arts community as a patron, collector, artist, and arts advocate. She and Harris were driven by a passion for contemporary art and believed that the arts bring strength and vitality to a community. Their legacy includes the Weston Art Gallery, a named permanent gallery at the Cincinnati Art Museum, and the named directorship at the Contemporary Arts Center. In celebration of her 90th year, Cincinnati Mayor John Cranley declared May 6, 2016, as Alice Weston Day.

Harris Weston was known as a thoughtful and generous public servant throughout his fifty years as a partner with the law firm of Dinsmore & Shohl and by serving as volunteer counsel for civic organizations, such as United Way, the Jewish Federation, Bridges for a Just Community, and the Cincinnati Institute of Fine Arts (now ArtsWave). But his most visible legacy is, perhaps, as spiritual architect of the Cincinnati Arts Association’s Weston Art Gallery. Recognizing artists as an often underserved population, his financial support and leadership enabled the gallery to provide opportunities for the painters, sculptors, and photographers of this region to undertake the work he knew to be invaluable to our society.

The Weston’s many attributes inspire us continually to strive for excellence in programming and administering the gallery that bears their name. Alice was quoted in the 1995 opening gala program of the Aronoff Center: “They say that New York is the center of cultural life, but the individual tends to get buried in it because it’s so gargantuan. In Cincinnati, in all walks of life, it’s of a size where you can find yourself. It’s a good city to live in.”