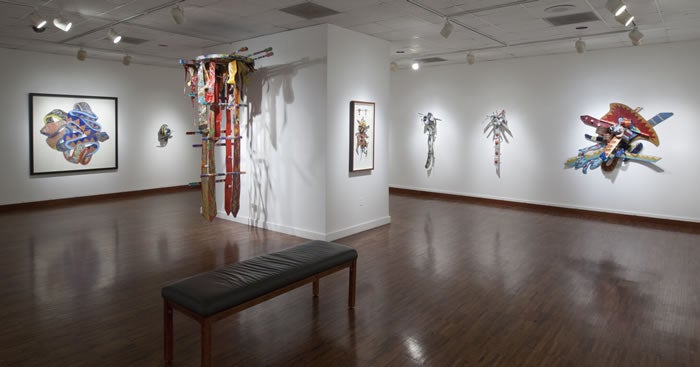 Straight from the Soul

Artist Kevin Cole (Atlanta, GA) established strong ties to Cincinnati through his long-standing relationship with fellow painter and mentor, the late Tarrence Corbin, who taught at the University of Cincinnati for more than twenty years. In his first major solo exhibition in Cincinnati, Straight from the Soul celebrates twenty-five years of art making and Cole’s evolution as a painter from surface illusionism to three-dimensional abstraction revealing the artist’s creative union of message and form. Cole’s colorful and expressive abstractions, often bridging painting and sculpture, are infused with political and social content informed by the struggles of African Americans.

Straight from the Soul originated at the Southwest Arts Center in Atlanta, GA, and was organized by Dr. Julie McGee, Curator of African American Art at the University of Delaware Art Museum. Its appearance at the Weston marks its seventh exhibition venue which includes galleries and art centers in Arkansas and Georgia.

Cole, Kevin - installation view with Jacob’s Ladder, Do Lord Remember Me I (right), 1b

Cole, Kevin - Allowing Faith to Twist its Way Through, 2009

Cole, Kevin - For the Sisters Who Carry the Burdens of Other Sistas (Elizabeth Catlett), 2000