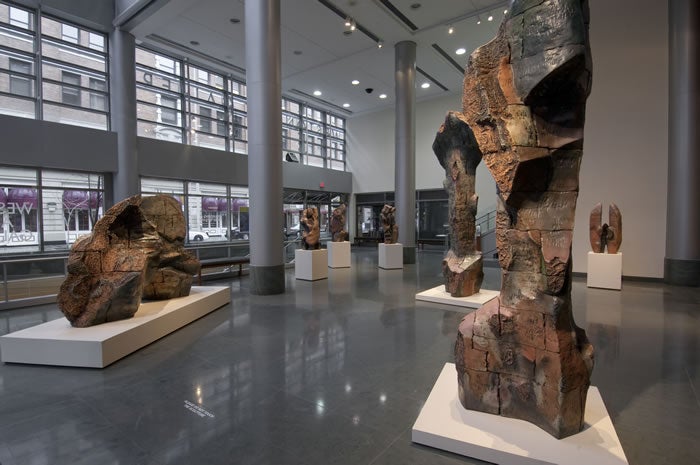 Both abstract and organic, Robert Pulley’s (Columbus, IN) large-scale ceramic sculptures combine ambiguous references to the human figure, organic growth, and geological stratification and fracturing. Pulley’s totemic forms imply humans embedded in the forces of nature. Situated in the street-level exhibition space of the gallery, they stand like sentinels emerging from the stone floors they occupy. Standing in Time’s Flow will feature monumental stacked works as well as smaller pedestal-based ceramic works created by Pulley during the past two years.

Robert Pulley earned a Bachelor of Science in Secondary Education in 1971 and a Master of Arts in Ceramics in 1979 from Ball State University (Muncie, IN). His awards include the Lilly Endowment Teacher Creativity Grant (1995) and an Individual Artist Grant from the Indiana Arts Commission (2008). Pulley’s sculpture has been featured in numerous group and solo exhibitions in Indiana, Illinois, Ohio, Kentucky, Tennessee, Florida, and California. He is also represented in private, corporate, and museum collections including: Indiana State Museum (Indianapolis, IN); Canton Art Institute (Canton, OH); Wright State University Museum of Art (Dayton, OH); and the Greater Lafayette Museum of Art (Lafayette, IN). He has had long-standing affiliations with Heike Pickett Gallery (Versailles, KY); Galerie Hertz (Louisville, KY); and Jackson Gallery (Columbus, IN). In addition to his artistic pursuits, Pulley served as an arts educator in Columbus, IN, for more than thirty years (1979-2010) at both the elementary and high school level.

Pulley, Robert - installation view 1b of Standing in Time’s Flow, 2012