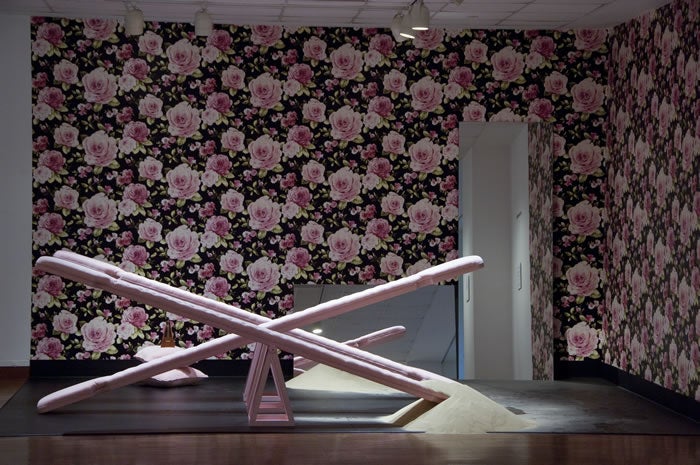 
A wide range of artistic disciplines including film, installation, sculpture, photography, drawing, textiles, and live performance will be presented by the following Cincinnati area artists: Jay Bolotin, Deborah Brod, Denise Burge, Stewart Goldman, Jill Rowinski, Rebecca Seeman, Joey Versoza, and Howard Wells. In addition, an installation will be created in the Gallery’s street-level exhibition space by artist Peter Haberkorn as a backdrop to musical performances by the Cincinnati Opera’s Young Artist Program in collaboration with the University of Cincinnati’s College-Conservatory of Music. The lunchtime performances will be presented on four Tuesdays at noon in July (July 2, 9, 16 and 23).

Deborah Brod has frequently employed fabric and clothing in her sculptural installations. Intrigued by Phillip Glass’s production of Galileo Galilei, she will create an installation featuring a suspended nun’s habit with a sound component inspired by Galileo’s relationship with his daughter Maria Celeste who became a nun. Brod’s work embodies the conflict inherent in Galileo’s scientific studies and the Catholic Church’s view of the universe.


Denise Burge, professor of fine arts at the University of Cincinnati’s College of Design, Architecture, Art and Planning, works in a variety of media including drawing, film, and quilt making. Burge will create a large-scale cut-and-fused fabric portrait of the actress playing Octavian in Der Rosenkavalier. The actress is playing a “trousers role,” a type of male role typically played by a woman; Burge seeks to emphasize the gender ambiguity of her physical presence.


Although recognized primarily as a painter, Stewart Goldman has also explored installation-based works during his long career, most notably through his tape wall drawings. In an effort to connect with the emotional impact of Aida, Goldman will incorporate sound and shadow projection in an enclosed room environment viewed only through a small opening at the top of the boarded-up entrance.


Jill Rowinski has for many years created socially conscious installations that combine sculptural elements with live performance, both as a solo artist and with fellow artist and collaborator Karen Dunphy under the name Art Force. Focusing on act one of the opera Der Rosenkavalier when the main character, the Marschallin, muses on her own waning youth, the passing of time, and indecision of her current relationship, Rowinski’s installation will combine three pink upholstered seesaws, a set of mirrors, and a metronome to reference these concerns. As part of the installation, Rowinski will perform in collaboration with vocalist Chris Noel during the course of the opening reception.


Rebecca Seeman, sculptor and Foundations Department Chair at the Art Academy of Cincinnati, will create an evocative wall installation comprised of concave circular and perforated discs elevated from the wall on pins. Inspired by Galileo Galilei, the elongated formation suggests a celestial cluster of planets orbiting in an imaginary universe.


Since graduating from the Art Academy of Cincinnati with a bachelor of fine arts in 2000, Joey Versoza’s multimedia works mine pop-cultural detritus and have been featured at some of the most challenging exhibition spaces (past and present) throughout Cincinnati including the Linda Schwartz Gallery, Contemporary Arts Center, Aisle, Publico, Semantics, and U-Turn. In a new video piece conceived while listening to the sound track of Don Giovanni, Versoza humorously captures the mating rituals of Canada geese. Set against the dreary backdrop of a local mall, the geese construct loose but familiar narratives of love, solitude, and togetherness amidst a surrounding fort of Midwest consumerism.


As a photographer, Howard Wells has been photographing ordinary objects for more than three decades revealing the mystery in the things we think we know best. Over the years Wells has tried to reduce the literalness of his images, focusing instead on expressing the emotions they generate within him. Working with pinhole or altered lenses, Wells reflects on all four summer operas through a series of new photographs, each representing an emotional response to the individual performances.

Two artists have been influenced by operas outside the Opera’s upcoming summer program. Multidiscipline artist Jay Bolotin, whose long career has bridged music, theater, and visual arts, will premiere Kharmen, a twenty-minute animation created through the digital manipulation of original graphite drawings inspired by Carmen and Bolotin’s own rich assortment of characters. A series of drawings that served as the source imagery for the film will also be presented.


Peter Haberkorn makes sculptural installations using found material and scavenged objects. In response to the soaring heights of the gallery’s street-level exhibition space, he will suspend a series of boat sails in homage to the opera Billy Budd.