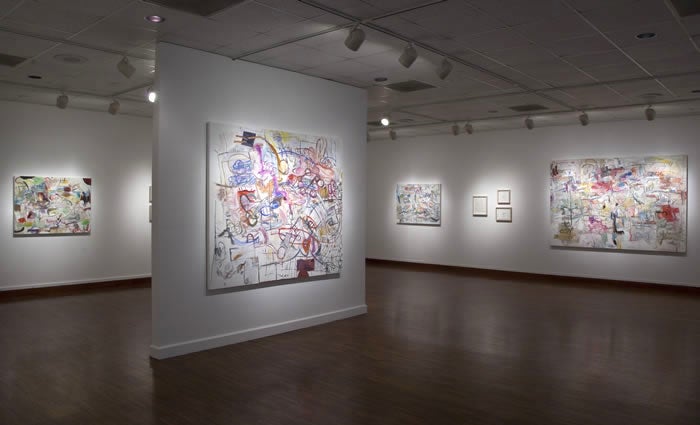 Painting, Drawing and Other Things

Works by Alan and Clara Crockett

Alan Crockett, a painter of frenetically fused abstractions, exhibits for the first time with Clara Crockett, drawer of "uncomfortable little stories." While both Crocketts (Columbus, Ohio) have enjoyed independent, long-standing, and successful artistic careers, they share ideas of play, space, line, and uncertain narratives in their artwork. Alan’s sumptuous and lyrical large-scale abstract paintings and Clara’s diminutive mise-en-scene drawings suggest small stages where the performance evokes unlikely encounters, surprising relationships, and tragicomic participation. Painting, Drawing and Other Things affords them the unique opportunity to explore and redefine their separate work together while revealing connections and surprising relationships.

Alan Crockett is an emeritus associate professor of art at Ohio State University. He earned a bachelor of fine arts in 1973 and a master of fine arts in 1975 from the San Francisco Art Institute. He is the recipient of multiple Individual Artist Fellowships from the Ohio Arts Council (1984, 1985, 1988, 1996 and 2002) and Greater Columbus Arts Council (1986, 1990 and 2004), a National Endowment for the Arts Visual Arts Fellowship (1983), and a Ford Foundation Grant (1982). His work has been presented in solo and group exhibitions across North America and in Europe. He has participated as a visiting artist at numerous universities and academic institutions including the University of Illinois, Champaign-Urbana (1989), Minerva Academy of Art, Groningen, Holland (1990), and Southeastern Louisiana University, Hammond, La. (2007).

Clara Crockett is a performance and visual artist. Regionally she has presented performances at the Cleveland Center for Contemporary Art, Akron Art Museum, University of Illinois, Wexner Center for the Arts, and the Cleveland Performance Art Festival invitational in 1988, 1989, 1990 and 1991. In New York City she has performed at La Mama La Galleria, ABC No Rio, and Manhattan Community College. She has received Individual Artist Fellowships from the Greater Columbus Arts Council (2000), Ohio Arts Council (1991, 1994, 1997, 2000, 2004 and 2008), the National Endowment for the Arts (1990), Yellow Springs Institute for Contemporary Studies and the Arts, Chester Springs, Pa. (1988), and a Regional Artist Grant from Randolph Street Gallery, Chicago (1995). Her drawings are included in the Viewing Program and Slide Registry at The Drawing Center, New York City, and have been exhibited at the Ohio Arts Council’s Riffe Gallery, Columbus, Ohio, as well as the Springfield Museum of Art in Springfield, Ohio.

Crockett, Clara - Reluctant Actors, Totem, If I Were a Tree

Crockett, Clara - The Fall, Flying Lessons, At the Still Point