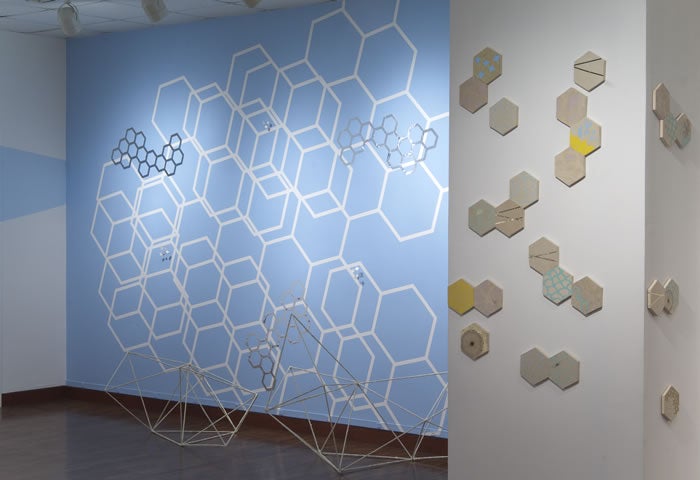 The Cincinnati Arts Association's Alice F. and Harris K. Weston Art Gallery in the Aronoff Center for the Arts presents Nightfall, an evocative series of room installations by Alice Pixley Young that examines ideas of nature and memory.

Employing fragile and temporal materials along with found objects, Alice Pixley Young creates large structures and installation environments that explore space and sound and blur the line between private and public space through the reflection of meaning, structure of memory, language and narrative. Nightfall explores ideas of nature and memory through three linked installations employing a broad range of materials and media that include paper and felt, steel and found objects, light and sound. Through her exploration of these mediums, she creates scenes which play against each other and recall the worlds of fantasy and fairy tale and the mirrored creation of our own memories.

Alice Pixley Young attended Ringling School of Art and Design (Sarasota, Fla.) and participated in the New York Studio Program earning a bachelor of fine arts in painting and printmaking in 1995. She received a master of fine arts in painting from the University of Maryland (College Park, Md.) in 1998, and a master of arts in art education from the Art Academy of Cincinnati in 2001. She has taught at the University of Maryland (College Park, Md.), the Behrend College at Pennsylvania State University Erie (Erie, Pa.), and currently serves at the School for Creative and Performing Arts (Cincinnati, Ohio). In 1997, she participated in the Artist-in-Residence program at the Vermont Studio (Johnson, Vt.) and was a recipient of an Individual Artist Grant from the City of Cincinnati in 2003. Her work has been exhibited at a number of Cincinnati art venues including Semantics, Art Academy of Cincinnati, Carnegie Arts Center, Philip M. Meyers, Jr. Memorial Gallery at the University of Cincinnati, and Aisle Gallery. She has also participated in exhibitions at Morehead State University (Morehead, Ky.), Arlington Arts Center (Arlington, Va.), and Woman Made Gallery (Chicago, Ill.).

Pixley Young, Alice - Nightfall (detail of Over and Under), 2009, mixed media