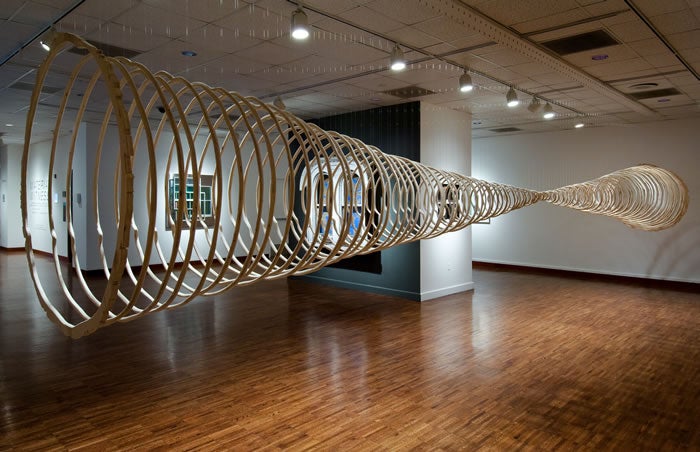 Terry Berlier is an interdisciplinary artist who works primarily with sculpture, installation, and video. Her work seeks to dissect and map the fabrication of time to expose and manipulate our understanding of cultural and environmental histories. Her large-scale installation Perfect Lovers, spanning thirty feet in length, features two symmetrical rows of concentric wooden rings that gradually expand in diameter from middle to opposite ends forming an elongated X. Perfect Lovers represents the cross sections of two trees—a familiar reference to nature’s clock and a dramatic visualization of time. As the life span of a tree is measured in centuries, Berlier’s installation illustrates and reminds us that human life is most often measured in decades. In a fast-paced, short-attention-span culture, this vivid reminder gives us pause.

Design 99 is based in Michigan and composed of husband and wife duo, Mitch Cope and Gina Reichert. Cope is an artist and Reichert is an architect. Their multi-video installation Total Benefit Solutions is part documentation and part instructional film of the various processes and techniques they employ in their art practice through efforts to engage the community and their neighborhood. The five videos highlight several of Design 99’s ongoing multi-tiered projects.

Matthew Flegle’s sculpture incorporates materials typically associated with home renovation projects. His monumental sculpture, Bewilderness, represents a moose constructed from blue Styrofoam insulation board, steel studs, concrete, and a five-gallon plastic bucket with an element of the moose partially embedded in a temporary wall structure. Flegle approaches the sculpture in direct ways by carving, casting and fabricating in a frank material language. “Compromised by calamity: disoriented, blinded and hobbled by its circumstances,” as the artist states, Bewilderness represents Flegle’s attempt to address complex human conditions.

Peter Haberkorn creates three-dimensional collages using found material and scavenged objects. Originally inspired by his architectural restoration activities, as well as by the finishing materials he used in fine art framing, he became fascinated with the formal and evocative potential of cast-off, recycled and industrial components. Haberkorn’s Pool House Flurries makes use of a former pool house the artist took apart and reconstructed in the gallery. Filled with a vortex of swirling down feathers, it evokes the paradox of a structure associated with the water of summertime now filled with the snow of winter.

Philip Spangler, working with collaborator Aaron Walker (a founding member along with Spangler of the former alternative exhibition venue CS13 in Cincinnati), offers Open Source Gallery, an inexpensive structure designed to adapt to the different functions of the DIY gallery. It is a traditional art gallery that doubles as a neighborhood research center and ultimately transforms into a functional and impromptu performance stage. Conceived as a multi-functional, modular, collapsible, pop-up creative space, this structure reconfigures an 8 x 8 foot room as an exhibition space, performance stage, library, print studio, information kiosk, and store. These varied functions are designed to interact fluidly, with the accessories of each identity collapsing into the frame of the structure and allowing for another, perhaps entirely different, type of use.

Chris Vorhees’s recent work reflects the artist’s curiosity and interest in the concepts of work and leisure. Custom furniture and prefabricated furniture are recent subjects. Appropriating and combining materials, aesthetics, and practices from these sources, Vorhees reworks and confuses them into forms that resemble furniture, sculpture, landscaping, and architecture. These ideas and forms are blurred together to highlight and celebrate contradictions and coincidences of design, language, and function. In Sofa Server, Vorhees replicates a piece of prefab furniture from scratch, informed only by the picture on the original packing box found discarded in the trash. Recreating the piece by steam bending and laminating veneers to create plywood parts and components, Vorhees reveals the idiosyncratic character of the object through the reworking of the industrial design with handmade processes.

Matt Distel is an independent curator based in Cincinnati, OH. He holds a BFA in Art History from Miami University in Oxford, OH, where he began his curatorial pursuits through exhibitions presented in individuals’ homes. He was co-founder and director of DiLeia Contemporary and its extension the CulturalMachineComplex with collaborator Kristin Rogers from 1996-99. He is the former Associate Curator of the Contemporary Arts Center and former Director of Country Club, a project-driven gallery with locations in Cincinnati and Los Angeles. He currently serves as director of Visionaries and Voices in Cincinnati.
download Matt's Statement Panel

Terry Berlier is an interdisciplinary artist who works primarily with sculpture, installation, and video. Her work is often kinetic, interactive, and or sound-based, and often focuses around everyday objects, the environment, ideas of non-place, place, and queer practice. She received a BFA from Miami University in Oxford, OH, in 1994 and an MFA in Studio Art from the University of California, Davis, in 2003. Her work has been exhibited in solo and group shows both nationally and internationally in cities including New York, San Francisco, Los Angeles, Sacramento, Barcelona, Venice, Girona, Meinz, and Tel Aviv. She recently received the Kala Art Institute fellowship and residency for 2009-10 in Berkeley, CA, and a residency at the Hungarian Multicultural Center in Budapest, Hungary, in July 2010. In 2008-09 she received the “Visions from the New California” Residency at the Exploratorium: Museum of Science, Art and Human Perception in San Francisco through the Alliance of Artists Communities. She has received grants from the California Council for Humanities “California Stories Fund,” the City of Cincinnati Individual Artist Grant Program, and the City of Davis Art Contract. She was a fellowship recipient for a residency at the Millay Colony for Artists in New York in 2004. Berlier has taught at UC Davis, UC Santa Cruz, and California College of the Arts. Since 2007, she has taught in the Department of Art and Art History at Stanford University.
download Terry’s Statement Panel

Design 99 (Detroit, MI), an artist duo made up of husband and wife Mitch Cope and Gina Reichert, explores the edges of art practice utilizing design, architecture, found materials, and utilitarian objects to propose creative solutions to complex problems. Their practice has at its core the belief that transformation can happen in a natural way, “if we only take a look, think out-of-the-box and take action.” Recent projects have been presented at the Bemis Center for Contemporary Art (Omaha, NE); Museum of Contemporary Art (Detroit, MI); Kunsthalle Wien Project Space (Vienna, Austria); and Gibb’s Learning Gallery at the Detroit Institute of Arts (Detroit, MI).
download Design 99’s Statement Panel

Matthew Flegle was born and raised in rural Ohio which serves as inspiration for his work. He received a BFA from the Ohio State University in 1995 and an MFA from Stanford University in 2003. He was an artist-in-residence at Anderson Ranch Arts Center in Snowmass Village, Colorado, from 1998-99; the Vermont Studio Center in 2000; and at the Bemis Center for the Arts (Omaha, NE) in 2000-01. He was awarded the New York Foundation for the Arts Fellowship in 2001, and the Murphy + Cadogan Award in 2002. His work has been featured in exhibitions that include Daily Special, Catherine Clark Gallery, San Francisco (2003); Frenzy II, benefit auction for The Luggage Store Gallery, San Francisco (2004); and Close Calls, Headlands Center for the Arts, Sausalito (2005). Flegle returned to Columbus, OH, in 2006 to accept a teaching position at the Columbus College of Art and Design where he currently serves as an Associate Professor of Sculpture.
download Matthew’s Statement Panel

Peter Haberkorn is an artist living in Cincinnati who makes three-dimensional collages using found material and scavenged objects. He attended the Art Institute of Pittsburgh and the Southern California Institute of Architecture where he received a Bachelor Degree in Architecture in 1983. In 1983, he moved into and helped to restore the historic Schindler House in West Hollywood, CA. Between 1987 and 1994 he was the owner of Archival Framing Services, a fine arts framing business specializing in the archival treatment of art. Subsequently, he sold his business to concentrate on his own artwork. In 1995, he moved to San Francisco, and created a series of site-specific installations at Picture Gallery in 1998 and 1999. His work was also featured at Evolving Space Gallery. Between 2001 and 2006, he lived and worked in Rotterdam, The Netherlands. Since relocating to Cincinnati in 2007, Haberkorn’s work has been featured at KZF Gallery and the Carl Solway Gallery.
download Peter’s Statement Panel

Philip Spangler earned a BFA in Sculpture from the College of Design, Architecture, Art and Planning at the University of Cincinnati in 2008. He has exhibited his sculpture in group and solo exhibitions in a number of Cincinnati venues including the Reed Gallery at the University of Cincinnati, Nicholas Gallery, Country Club, Prairie, Krafthouse, and the Chidlaw Gallery at the Art Academy of Cincinnati. Spangler is a founding member of CS13, a gallery and performance space that operated in Cincinnati from 2009-11 and remains active as an arts collective nomadically producing, curating, and publishing. In 2009, he was awarded an Individual Artist Grant from the City of Cincinnati. Spangler is currently an MFA candidate in the School of Fine Art at Ohio State University in Columbus, OH.
download Philip’s Statement Panel

Chris Vorhees is a sculptor living and working in Cincinnati. He earned a BFA in Painting in 1995 and an MA in Sculpture in 1997 from Ball State University (Muncie, IN); and an MFA in Sculpture in 2002 from the University of Washington (Seattle, WA). His work has been featured in solo and group exhibitions in numerous Cincinnati venues that include AISLE Gallery, PUBLICO, and the Reed Gallery at the University of Cincinnati’s College of Design, Architecture, Art and Planning. Regional venues include the New Center for Contemporary Art (Louisville, KY) and the Indianapolis Art Center (Indianapolis, IN). He has been a frequent collaborator with SIMPARCH, an artist collaborative based in Cincinnati and Chicago, with projects presented nationally and internationally at the Wexner Center for the Arts (Columbus, OH); Documenta XI (Kassel, Germany); the Whitney Biennial (New York, NY); and the Tate Modern (London, England). In 2009, he was awarded a prestigious Efroymson Fellowship Award.
download Chris’s Statement Panel

Haberkorn, Peter - All in Good Time (Margaux and Felix Taking a Walk in the Nuclear Winter), 2011