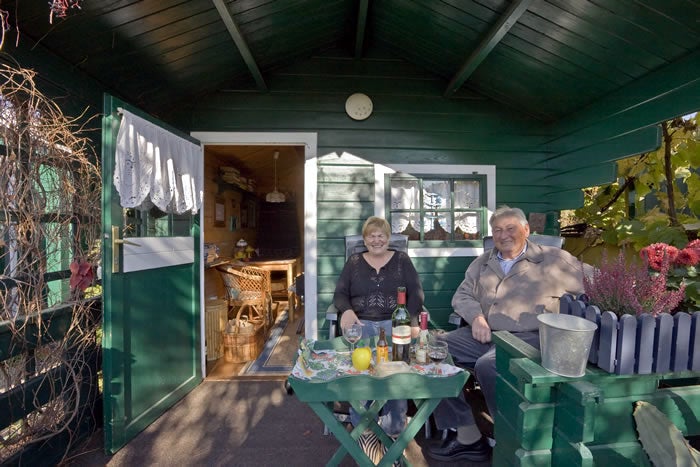 Traveling with fellow photographer Fredrik Marsh to Dresden, Germany, Ardine Nelson (Columbus, Ohio) became intrigued with the community of private garden associations whose members are families seeking green spaces in urban areas. With large-scale color photographs, she documents her visual interest in landscape imagery through the formal organization of space and our imprint on the natural environment. Green Spaces features Nelson's ongoing exploration into these personal garden creations including a new series of photographs from recent trips to Dresden that incorporates the proud gardeners.

Ardine Nelson earned a bachelor of science in art education from Northern Illinois University (DeKalb, Ill.) in 1970 and a master of arts in sculpture and photography in January 1972. She received her master of fine arts in photography in August 1972 from the University of Iowa (Iowa City, Iowa). She has been the recipient of grants and fellowships from the Greater Columbus Arts Council, Ohio State University, and the Ohio Arts Council. In 2008, she received a prestigious John Simon Guggenheim Fellowship award. She has been a frequent lecturer and participated as a visiting artist at Hope College (Holland, Mich.), Otterbein College (Columbus, Ohio), and Kenyon College (Gambier, Ohio). She has received numerous jurors' awards and has an extensive exhibition history with her photographs featured in regional group and solo exhibitions throughout the Midwest and internationally in Aleppo, Syria, and Dresden, Germany.

Ardine Nelson, installation view with 3 Schrebergartens in the winter (right)