From the 20th Century

From the 20th Century

On Friday, November 17, from 6 to 9 p.m., the Cincinnati Arts Association’s Alice F. and Harris K. Weston Art Gallery in the Aronoff Center for the Arts will premiere two new exhibitions: From the 20th Century: An Incomplete History, a contemplative series of works by Michael Mercil that examines the social and cultural shaping of American domestic landscapes; and Memebiotics, a new series of meticulously executed drawings, prints and animated video by Andrew Au that merges biological and mechanical systems in an imaginative exploration of the complex theory of memetics.

In a wide range of media that includes painting, sculpture, installation and performance, the artwork of Michael Mercil is formed from everyday objects and familiar phrases and inspired by such diverse sources as New England transcendentalist philosophy; utopian religious, political and social expressions; and twentieth century avant-garde experiments.

From the 20th Century will include a set of three black stone sculptures (shadows) along with three white plaster copies (ghosts) that materializes a simple question: What is the object of sculpture now? The individual pieces (presented in the Weston Art Gallery’s street-level space) conform in size to grave markers that are, among other things, an origin for western sculpture. By shadowing past (or original) sculptural practices, Mercil argues not for a return to such practice, but instead re-marks the enigmatic presence of the object within the field of art today.

In the lower west gallery, Mercil will configure an assembly of objects, images and ideas that together consider a number of significant twentieth century cultural events, including the origin of the readymade (1913), Einstein’s general theory of relativity (1915), and the Voting Rights Act of 1965. While differing considerably in material and scale, they likewise consider notions of origin and temporality—of the past as legacy for the future and the future already become the past.

Michael Mercil lives and maintains a studio in Columbus, OH where he is associate professor and chair of graduate studies in the Department of Art at The Ohio State University. He earned a bachelor of fine arts from Minneapolis College of Art & Design in 1978, and a master of fine arts from the University of Chicago in 1988. His work has been featured in solo and group exhibitions organized by the Columbus Museum of Art (Columbus, OH); North Dakota Museum of Art (Grand Forks, ND); College of Wooster Art Museum (Wooster, OH); University of Virginia Bayly Art Museum (Charlottesville, VA); SPACES (Cleveland, OH); Bockley Gallery and Minneapolis Institute of Arts (Minneapolis, MN); and N.A.M.E. Gallery (Chicago, IL). He collaborated with his wife Ann Hamilton and landscape architects Michael Van Valkenburgh Associates on an award-winning design for Allegheny Riverfront Park in Pittsburg h, PA., completed in 2001. They again collaborated on the design of Teardrop Park for Battery Park City in New York, dedicated in 2004. Mercil has been the recipient of an Ohio Arts Council Individual A artist F fellowship (2005), Greater Columbus Arts Council Fellowship (2002), McKnight Foundation Visual Arts Fellowship (1990), National Endowment for the Arts Artist Design Fellowship (1989) and the Jerome Foundation Visual Arts Fellowship (1986). 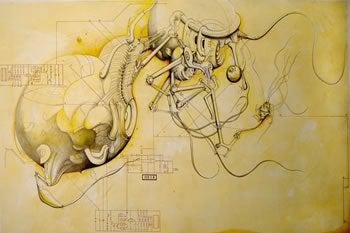