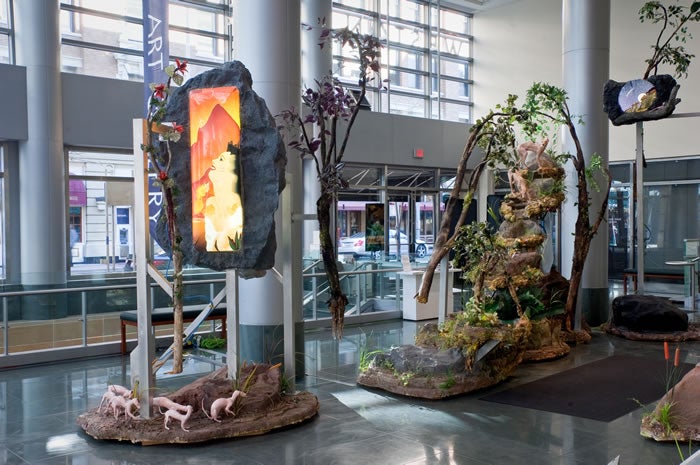 On Friday, September 23, the Cincinnati Arts Association’s Alice F. and Harris K. Weston Art Gallery in the Aronoff Center for the Arts debuted its seventeenth season with the premiere of three new exhibitions that examine our relationship to the natural environment: Exurbia, an artificial world of plastic and synthetic materials engineered by the Cincinnati-based artist collective TODT; Earthbound, a beautiful and haunting series of photographs by Marcella Hackbardt that imagines positive and productive relationships of people to the earth and to animals; and La Medida, a series of video installations by Claudia Esslinger that explores the role of human analytic systems in our understanding of the natural world. (See separate press releases for Marcella Hackbardt and Claudia Esslinger’s concurrent exhibitions.)

With new exhibitions in New York at Sideshow (2001, 2003, 2006), The Lab (2005), and in various venues in Cincinnati (2001-03), the last decade has seen TODT’s palette transformed from technological skeletons to “dollar store” waste. In 2007, TODT had a solo exhibition in Philadelphia at Fleisher Ollman Gallery and the Musée des Arts Georges Pompidou in Cajarc, France. In 2008, TODT held major exhibitions at the New York Arts Center in Saratoga Springs and at les Abattoirs in Toulouse, France.