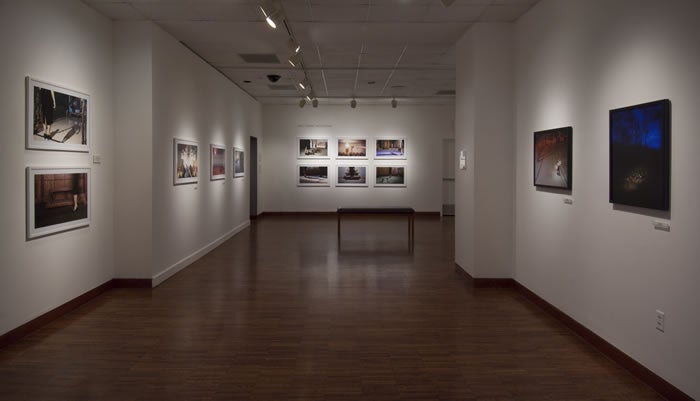 Allison Grant’s Image as Place series creates fictional situations with staged and strangely lit settings that echo feelings of apprehension and hope. Grant’s exterior settings, which are often under construction or in some form of deterioration, serve as the backdrop for a solo figure that is sometimes in an anxious period of transition, much like the site they inhabit.
download Allison's Statement Panel

Allyson Klutenkamper’s Domicile and Circumstances series use domestic interiors to explore the photograph as a visual metaphor for the psyche. Her large-scale photographs of interiors with an anonymous female figure suggest film stills and create an ambiguous narrative and subverted reality.
download Allyson's Statement Panel

Nate Larson’s humorous investigation of Kirlian photography employs everyday food items such as salami, Spam, or a Twinkie, and shoots high voltage electricity through them in a hand-built imaging device which records multi-colored emanations on light-sensitive paper, thus elevating these mundane subjects to an ethereal state.
download Nate's Statement Panel

Guennadi Maslov straddles two worlds with his photographic subjects—his current home in Cincinnati and his former in the Soviet Ukraine where he was born and raised. His haunting portraits of individuals from both spheres of his life attempt to catch the fluid material of the subconscious, reconcile the eastern and western halves of his brain, and illustrate the fragile dualities of human nature.
download Guennadi's Statement Panel

Emily Hanako Momohara’s Koden series (“koden” is the Japanese tradition of gift giving to bereaving families) contemplates bereavement and legacy. Through the use of tableaus and funeral home settings, she creates self-portraits that represent haunting aspects of family members who have passed on.
download Emily's Statement Panel

David Rosenthal’s most recent photographs are inspired by his investigations into 19th-century Spiritualists who projected images onto smoke to create the illusion of a visit of a loved one from beyond the grave in a phenomena that came to be known as phantasmagoria. Through the manipulation of light, time, and film, Rosenthal captures his own “spirits” in a beautifully ghost-like series of photographs taken at the Cincinnati/Northern Kentucky International Airport.
download David's Statement Panel

Maslov, Guennadi - installation view of Picnicking with Sergei and The Ebb (l-r, foreground)

Rosenthal - from Before and After Difference (detail), ink-jet prints, Involuntary Amorphology, video

osenthal - from Before and After Difference (detail), ink-jet prints, Involuntary Amorphology, video

Rosenthal - from Before and After Difference (detail), ink-jet prints, Involuntary Amorphology, video

Rosenthal, David - (image left and right) from Before and After Difference, 2009, ink-jet prints

Rosenthal, David - installation view (detail) from the series Before and After Difference, ink-jet prints