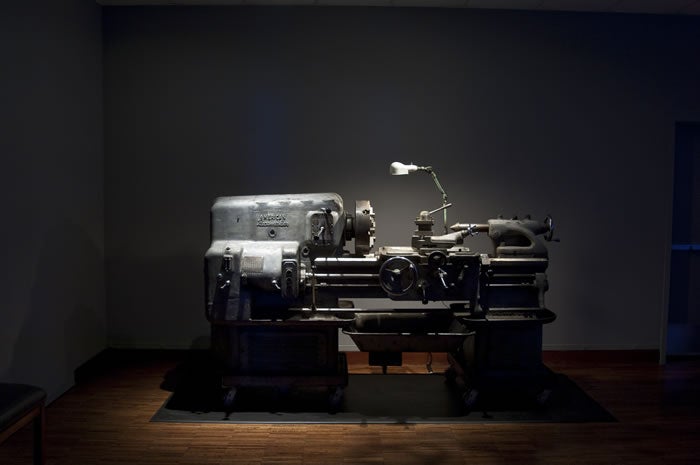 On Friday, March 15, the Cincinnati Arts Association’s Alice F. and Harris K. Weston Art Gallery in the Aronoff Center for the Arts will premiere three new exhibitions: Redux, a new series of elegant minimalist wood sculptures by Robert Fry; Symbiotic Balance, an exploration into the psychology of color by Kathryn Kuntz; and American Pacemaker, an evocative film installation by Russell Johnson examining the political and social landscape of manufacturing in the Midwest. (See separate press releases for Robert Fry and Kathryn Kuntz’s concurrent exhibitions.)

Examining the continuing economic slump that the Midwest has experienced in recent years, Russell Johnson (Cincinnati, OH) will present a multi-channel, multi-screen digital film installation in an aesthetic environment of varied sources of image and sound. American Pacemaker addresses the changing landscape and people of the Midwest impacted by economic trends and political policy. Johnson’s installation structures familiar imagery (a distribution warehouse north of Cincinnati, a former machine shop in Northside, a decaying wall of an abandoned factory in Reading, OH, and a defunct furniture building in Over-the-Rhine) viewed as looping projections with verbal rhetoric from “talking heads” presented on video monitors atop tall pedestals. While elements of Johnson’s roots as a filmmaker working in traditional forms is evident in some aspects of the installation, he imagines the project as a documentary film exploded into its component elements—allowing for an unconventional, nonlinear and more compelling viewing experience.

Russell Johnson was born in Ogden, UT, in 1955 and spent much of his early life in the inter-mountain West. He received a master of fine arts in filmmaking from the University of Utah in 1983. In 1981 he was an intern-filmmaker at the June Laboratory of Robert Redford’s Sundance Film Institute and from 1982-84 he was Artist-in-Residence at the Utah Media Center in Salt Lake City.

Johnson has received numerous honors and awards for his film and video work and has been exhibited on PBS member stations and at festivals throughout the world including the Athens International and Ann Arbor festivals, Humboldt Film/Video Festival (award), the New York Exhibition of Short Film and Video (award), “Air de Paris” Gallery in Nice, France, the Cinema Giovanni International Film Festival in Torino, Italy, and the Cinema Texas International Showcase (award). He has received five Ohio Arts Council (OAC) Individual Artist Fellowships (1985, 1987, 1990, 1996, 2001) and, in 1999, was awarded a prestigious OAC artist residency at the Headlands Center for the Arts, in Sausalito, CA. Additionally, he was the recipient of a regional National Endowment for the Arts Fellowship (1989), two production grants from the OAC’s Media Arts Panel (1994, 1996), and an OAC Artist Project Grant (2000), and a City of Cincinnati Individual Artist Grant (1996).

Teaching positions include the University of Utah in Salt Lake City; Weber State College in Ogden, Utah; Ohio University in Athens, OH; and Wright State University in Dayton, OH, where he is a longtime professor of filmmaking (1990 to present) and currently the Motion Pictures Program Coordinator.

Russell Johnson has a long association with the Weston Art Gallery beginning with the presentation of his imagist film, Necropolis, in 1997; as a participating curator for the Gallery’s four InterMedia Series film, video, and performance festivals (2000-04); and continuing as the founder and lead instructor for the annual Families Create! Children’s Animation Workshop—now marking its eleventh season.