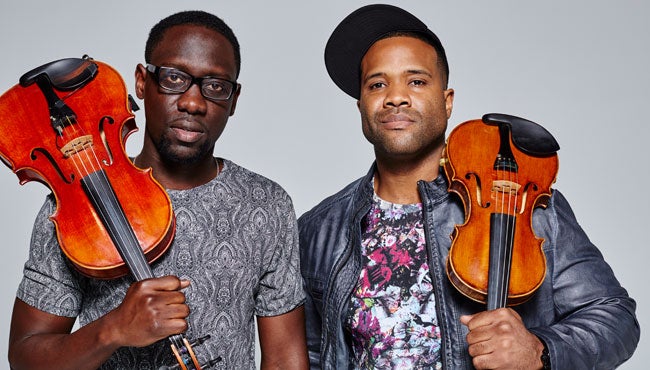 “Their music will keep classical music alive for the next generation.” – NPR

Cincinnati, OH – Hip-hop meets classical violin when the nationally-acclaimed band, Black Violin, makes its much-anticipated return to Cincinnati at Music Hall’s Springer Auditorium on Tuesday, April 16, 2019 at 7:30 PM in an all-new tour, details of which will be announced at a later date.

Black Violin is composed of classically-trained violist, Wil B., and violinist, Kev Marcus, who combine their classical training and hip-hop influences to create a distinctive multi-genre sound that is often described as “classical boom.” Black Violin has shared stages with top names including Kanye West, Aerosmith and Tom Petty, and has creatively collaborated with the likes of Wu-Tang Clan, Wyclef Jean and Alicia Keys.

Black Violin has spent the summer working on their upcoming album due out in 2019 and experienced a well-received winter run which included back-to-back sold out performances at The Kennedy Center in Washington, D.C.

Black Violin is currently writing and recording their next studio album with a track and music video expected to be released soon. The band’s most recent record, Stereotypes, debuted at #1 on the Billboard Classical Crossover Chart and #4 on the Billboard R&B Chart. NPR praised the album and band, saying “their music will keep classical music alive for the next generation.”

Earlier in the year, Black Violin was announced as the Turnaround Artist for Mary B. Bethune Elementary School in their hometown of Broward County, FL. Turnaround Arts, a national education program of the John F. Kennedy Center for the Performing Arts, infuses arts into struggling schools to support overall reform efforts. Founded by President Obama’s Committee on the Arts and the Humanities in 2012, the program partners schools with music instrument grants, arts supplies, professional development, and musicals, and pairs each school with an artist to provide mentorship, inspiration, and support for the school’s journey in the program. Turnaround Artists include Elton John, Edward Norton, and Yo-Yo Ma, among other highly-acclaimed members of the arts community.

The duo composed music for the television series Pitch which debuted on FOX in 2016, and has appeared on HBO’s Ballers, The Tonight Show, The Wendy Williams Show, The Kate TV, and The Ellen Show.

In addition, Black Violin has performed for more than 100,000 students in the past twelve months throughout North America and Europe. The band is endorsed by Yamaha Music and Bose, and has partnered with the National Association for Music Manufacturers (NAMM) to continue their advocacy for accessible music education.