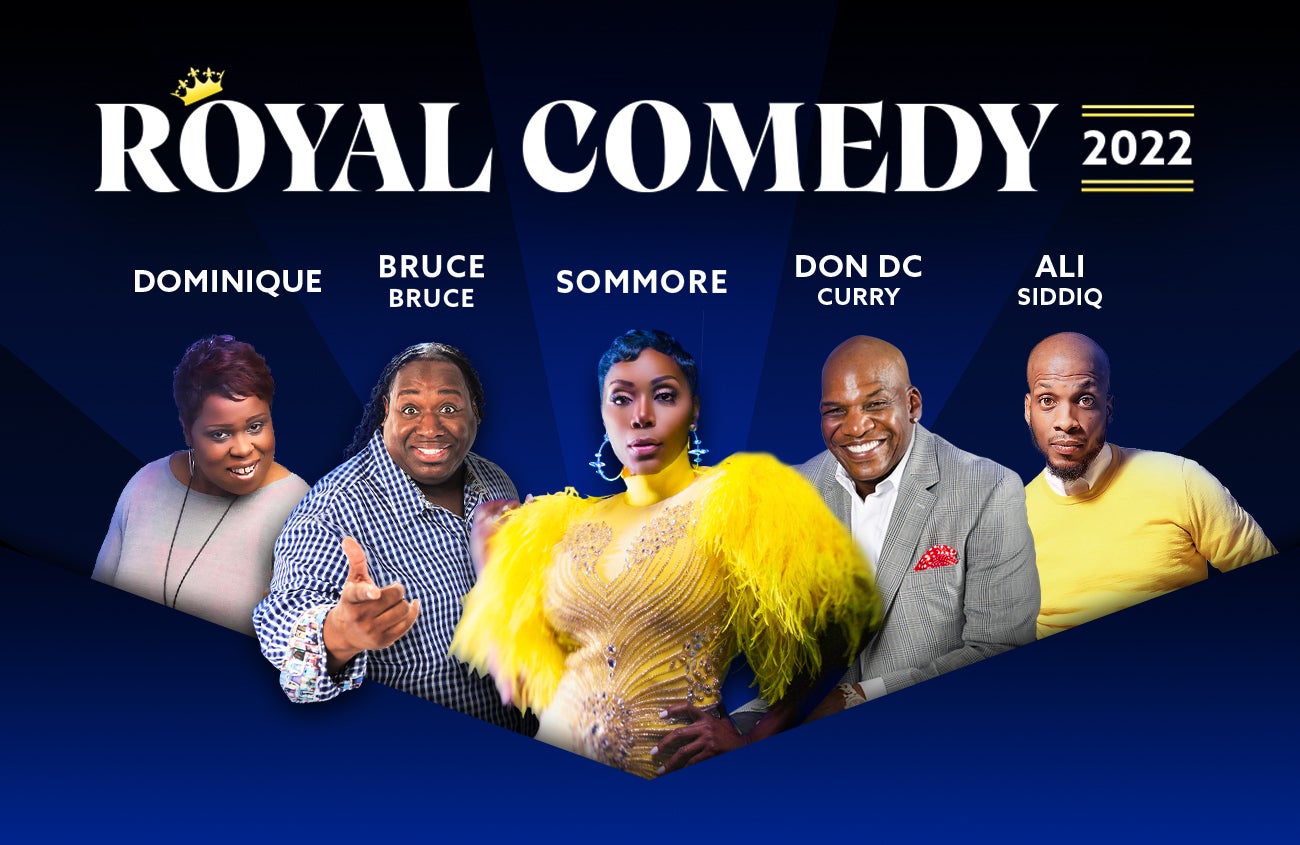 SOMMORE
In her more than twenty-year career, this award-winning comedienne of Chandelier Status has become a trailblazer for women in the comedy business as one of the most successful comedians in the U.S. and abroad. Sommore has been featured in a number of hit films including Soul Plane, Something New, and Friday After Next. Her all-new, self-produced comedy special, A Queen With No Spades, recently premiered on Showtime. For more information, visit sommore.com. Follow Sommore on Facebook @QueenSommore, Twitter @sommoresofunny, and Instagram @sommore.

BRUCE BRUCE
Bruce Bruce is a name synonymous with keeping audiences rolling with laughter thanks to his captivating improv skills and larger than life comedic style. You can currently find Bruce on IFC’s Maron and in constant reruns of Comic View on BET. For more information, visit bruce-bruce.com.  Follow Bruce on Facebook  @mybrucebruce, Twitter @mybrucebruce, and Instagram @mybrucebruce.

DON DC CURRY
Don "DC" Curry's outspoken comedy style made him a star at San Francisco's comedy clubs starting in the '90s, before taking his act across the nation. Best known for playing Uncle Elroy Jones in the hit films Next Friday and Friday After Next, Curry is a regular guest and former host of BET's Comic View and has also been seen on HBO's Def Comedy Jam. As an actor, he has had regular roles on TV's Grace Under Fire and The Steve Harvey Show, and was a guest voice on the animated hit The Boondocks. For more information, visit dondccurry.com. Follow Don DC Curry on Facebook @DonDCCurryOfficial, Instagram @dc.curry.18, and Twitter @dondccurry.

DOMINIQUE
From headlining comedy clubs to showing out on television, Dominique is the new face of funny in America. She’s created laughs on stages across the world, including NBC’s Last Comic Standing, HBO’s Def Comedy Jam, Comedy Central’s Chappelle’s Show, OWN’s Herlarious, and the hit television series Black Jesus, now airing on Adult Swim. During a chance encounter at a small comedy club with SNL star Tracy Morgan, Dominique was selected as his opening act for his Caroline’s on Broadway show. Since then, Dominique has wowed audiences from London to LA, and all points between. Follow her on Facebook  @DominiqueComedi, Instagram @dominiquecomedi, and Twitter  @dominiquecomedi.

During his six years of incarceration Ali Siddiq cultivated the art of entertaining through comedy by sharing his funny stories and opinions with his fellow inmates. As a Houston native, Ali advocates for community leadership, outreach, and fundraising. Ali has appeared on BET’s One Mic Stand, Bill Bellamy’s Ladies Night Out Tour on HBO, and the season finale of HBO’s Def Comedy Jam. On television, Ali Siddiq has made appearances on Showtime, HBO, BET, AXS, Comedy Central’s critically acclaimed storytelling show This is Not Happening.