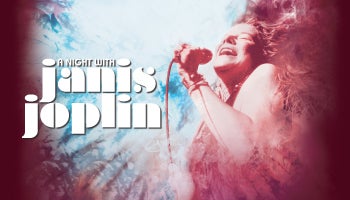 A NIGHT WITH JANIS JOPLIN

A NIGHT WITH JANIS JOPLIN

The Tony® Award-nominated Broadway musical A Night With Janis Joplin rocks the Aronoff Center’s Procter & Gamble Hall on Tuesday, October 1, 2019 at 7:30 PM. The much-anticipated show is part of the Cincinnati Arts Association’s 2019-20 Season.

A Night With Janis Joplin is a musical journey celebrating Janis Joplin and her biggest musical influences – trailblazers like Aretha Franklin, Etta James, Odetta, Nina Simone and Bessie Smith, all of whom inspired Joplin to become one of Rock ‘n’ Roll’s greatest legends. Like a comet that burns far too brightly to last, Joplin exploded onto the music scene in 1967 and, almost overnight, became the Queen of Rock ‘n’ Roll. Her unmistakable voice, filled with raw emotion and tinged with Southern Comfort, made Joplin a must-see headliner from Monterey to Woodstock. Audiences will enjoy Joplin favorites, including “Piece of My Heart,” “Cry Baby,” “Me and Bobby McGee,” and many others.

The New York Times raved that A NIGHT WITH JANIS JOPLIN “rocks the house” and Variety called it “electrifying.” New York 1 cheered, “This will rock your socks off!”

A Night With Janis Joplin is created, written, and directed by Randy Johnson and stars Tony® Award-nominee Mary Bridget Davies.

MARY BRIDGET DAVIES (Janis Joplin) is an American singer and actress who performs with her own band, The Mary Bridget Davies Group, and is also an interpreter of Janis Joplin's music. She received a Tony Award® nomination for Best Lead Actress in a Musical for her performance as Janis in the Broadway production of A Night With Janis Joplin. She has toured in Europe with Janis Joplin's original band, Big Brother and the Holding Company, and tours to festivals and clubs worldwide with The Mary Bridget Davies Group, which released an album with original songs in 2012 titled Wanna Feel Somethin’.

Previously, she was nominated in 2013 for a Helen Hayes Award for Best Lead Actress in a Musical. Davies has also performed in the First National Tour of A Night With Janis Joplin and the Broadway musical revue It Ain't Nothin' But the Blues, selling out shows across the country.

Davies recent performances include SXSW and a residency in Pasadena, CA, where she was joined by The Doors’ Robby Krieger, Slash, The MC5’s Wayne Kramer, Dave & Phil Alvin of The Blasters, Bob Mothersbaugh of DEVO, Ty Taylor of Vintage Trouble, Doug Pinnick of King’s X, and members of Tom Morello’s Nightwatchmen and Gnarls Barkley.

For more information about A Night With Janis Joplin, visit www.anightwithjanisjoplin.com.